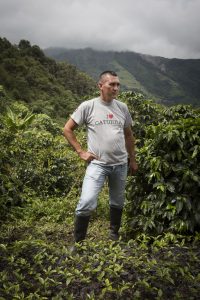 With a sweet, Caramel and citric base, accentuated with tropical bursts of acidity like peach, this washed Caturra from Ernedis Rodriguez won third place in the Huila Mágico .Finca El Paraïso, from Ernedis Rodriguez is a beautiful farm about 12km East of the town of Gigante in Huila. Farm “The Paradise” is exactly at the top rim of a mountain with most of the fields facing west towards the beautiful Magdalena river valley. The farm consists of a total of 14 hectares, with abundance of Caturra, but also including 7 hectares that remain part of a Natural Reserve. The Coffee Quest(green coffee importeur)Colombia has worked closely together with Ernedis for many years, improving post-harvest processing, introducing new varieties, fermentation times, making adaptions based on cupping results.

One of the most remarkable aspects is that Ernedis treats the farm as a company. Naming it “the company” during conversation as well as maintaining a very organized coffee area. Coffee farming is often a family business and with Ernedis that is no different. He gets a lot of support from his wife and children. The family is included in the operations and his both daughters have been growing towards jobs (Quality Grader and Business Administration) within the local coffee sector in Huila. His best quality is 100% Caturra, but also the Castillo lots are scoring higher every year. The coffee is processed at approximately 1804 m.a.s.l. in small solar dryers and sold as separate varieties. In the next few years his volume of Caturra is expected to increase with about 5000 trees. The new plots will reach maturation soon and improve his position to finance the daily operations of the farm.